Today, 23rd January is the birth day of Subhas Chandra Bose, the one and only Netaji, an iconic figures of our struggle for freedom.  Apart from West Bengal, the rest of India hardly remembers the man except in some lacklusture official and private functions.

Subhas’s life and deeds stand out among those who put themselves on the firing line in order that the succeeding generations could breathe in free India.   One feels sad that a country, which reveres its tinsel heroes almost to the point of worship, has all but forgotten this real life hero.

Our history text books for young learners do not spare more than a couple of paragraphs, if even that much, on Subhas Bose.  They provide nothing more than sketchy information and mention little about his personal sacrifices for the country, his long political career or his ideology and world view.

It is not that the Indian people just forgot their hero.  Those who came to power when the British left saw to it that they did. Pliant authors and historians consistently fed the people with the lie that the non-violent movement led by Mahatma Gandhi alone led to India’s freedom.  Young Indians of today are mostly unaware of hundreds of youths who sacrificed their lives for the sake of our freedom. Simply because they believed in an ideology and method different from those of Gandhi and Nehru, sycophants masquerading as historians have all but earased them from history books. Their handiwork is also evident on internet pages which proclaim August 18, 1945 to be the day on which Subhas Bose died at Taipei. 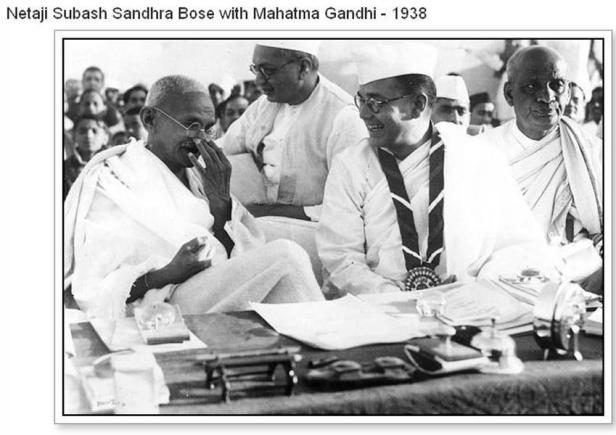 Coming to Netaji, what a halo that man had acquired at such a young age! At one stage he was the voice of young India.  He commanded such respect and support that he became President of the Indian National Congress twice – once even defeating the nominee of Gandhi himself, who had to admit, “Sitaramaiah’s defeat is my defeat”! When it came to matters of principle, Subhas alone had the courage to stand up to or even defy Mahatma Gandhi, without being irreverent.

As Congress President, he faced a hostile Working Committee.  Its members conspired to use their weapon of “non-cooperation” against Subhas rather than against the British.  He had to resign.  He saw no other option than to employ the old strategy of using one thorn to extract another to force the British out.

We can debate if Netaji was corrct in his assessment of the course of world history and in adopting the strategy he did to wrest India’s freedom.   But none can question the  burning patriotism and exemplary courage of the man who, even in the face of great adversity or setbacks, never once wavered from his single-point goal, viz. to make India free, whatever be the cost. The story of his journey through India, Afghanistan, Russia, Italy, Germany, Japan, Burma and then his mysterious disappearance at Taipei is more captivating than many best-selling thrillers.

I had a long session with a former member of the Indian National Army in Toronto.  This venerable Sikh gentleman told me about his days in the INA.  He narrated how Netaji’s speeches instilled such patriotic fervour in their minds that they forgot their religious identities, and fought for the freedom of the motherland.

How much we need such an inspiring leadership in today’s India which is full of pseudo Netajis and false nationalists!